Louise’s husband has recently been imprisoned. She struggles to keep her family together while dealing with bureaucracy.

Michel, a cattle farmer in Franche Comté, enjoys winter’s calm by passing the time with his young apprentice, Francis.

My sense of modesty

Hafsia is going to have to remove her hijab for an oral exam. She, however, feels that she alone is the one who should decide.

« You have to come out of your shell if you want to start living ». A young woman has disturbing visions. She tries to understand her dreams. She alone can overcome her fears.

There are some deals that one would rather forget. She finds herself alone in a room together with the Devil, or is it perhaps herself? Is the outcome of this meeting unavoidable?

Q&A with the director 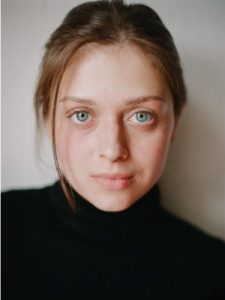 Yuliya Antonova is a russian director and actress who resides in Sweden. Born in 1994 in Ufa, she moved to Moscow in 2011 to study at the state University. At the same time she learned French at the French Institute of Moscow, applied to numerous casting and worked on her documentary about the life in a student home ( which was meant to part of an application to a summer internship at the FEMIS).

In 2018, after studying cinema at the university of Oslo, Yuliya presented her first short film as director and scriptwriter « In the water ». The film was shot in Trouville within the festival Off-Courts creative lab. The same year she took part to the ”Uppsala Talangdagar” of the Uppsala International Short Film festival.
Since then she has worked on two self produced movies ( including “in your room”) and is currently directing her fourth movie.